Posted by: FROZ February 1, 2012 in Jokes Leave a comment

Amazing Colin Joke – A rich man living in Darwin decided that he wanted to throw a party and invited all of his buddies and neighbors. He also invited Colin, the only aborigine in the neighborhood.

He held the party around the pool in the backyard of his mansion. Everyone was having a good time drinking, dancing, eating prawns, oysters and BBQ and flirting…

At the height of the party, the host said, “I have a 15ft man-eating crocodile in my pool and I’ll give a million dollars to anyone who has the balls to jump in.”

The words were barely out of his mouth when there was a loud splash and everyone turned around and saw Colin in the pool fighting the croc, jabbing the croc in the eyes with his thumbs, throwing punches, doing all kinds of stuff like head butts and choke-holds, biting the croc on the tail and flipping the croc through the air like some kind of Judo Instructor.

The water was churning and splashing everywhere. Both Colin and the croc were screaming and raising hell…

Finally Colin strangled the croc and let it float to the top like a dead goldfish. He then slowly climbed out of the pool.

Everybody was just staring at him in disbelief.

The host says, “Well, Colin, I reckon I owe you a million dollars.”

The rich man said, “Man, I have to give you something. You won the bet. How about half a million bucks then?”

“No thanks. I don’t want it,” answered Colin.

The host said, “Come on, I insist on giving you something. That was amazing. How about a new Porsche and a Rolex and some stock options?”

Confused, the rich man asked, “Well Colin, then what do you want?”

Colin said, “I just want the bastard who pushed me in.” 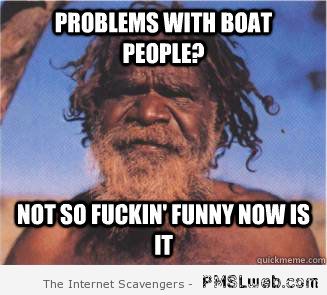 Previous: A fella enters a bar carrying an alligator…..
Next: Bigfoot Art – an amazing GIF sequence