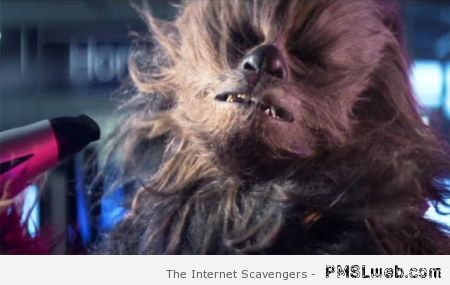 Chewie makeover - Chewbacca (aka Chewie) the most famous wookie of all time, was born in 200 BBY – before the battle of Yavin – on planet Kashyyyk. He was 2.28 meters tall for around 112 kilos, had the most exquisite brown hair from head to toes as well as gorgeous blue eyes, and his exceptional personality put aside, no doubt that these amazing physical attributes also contributed for what was of his fame.
Professionally, Chewie had been hired by Han Solo to co-pilot his ship: the Millennium Falcon; both pilots were very close and shared an unconditional friendship. As far as personal life was concerned, Chewbacca had married Mallatobuck whom he had met as a teen back on Kashyyyk but with whom he only got romantically involved with after his return as prior to that he had been enslaved by the Galactic Empire. Together they had a son: Lumpawaroo.
Chewie sadly died in 25 ABY – after the battle of Yavin – during the Yuuzhan Vong War.

Not always easy to be Chewbacca; with millions of fans our super wookie needed to look his best 24h/day in order not to let them down… so what was his secret?