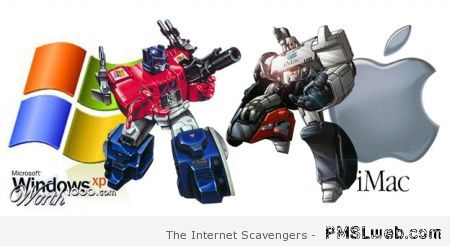 Mac Vs Pc Transformer style – One of the biggest battles of this century will no doubt remain the one opposing Bill Gate’s Microsoft to Steve Jobs’s Apple. The two multi-billionaire companies year after year engage in an endless battle with the sole purpose of taking over a maximum of our innocent souls.

Evidently it’s far from being a secret that so far Microsoft rules the roost and by far, mostly because they make their systems compatible with the hardware of a very long list of companies (IBM, HP, Dell…) which is a plus for most people, but at the same time the increasing rate of Apple devices adopted by consumers cannot be neglected (iPod, Ipad, Iphone…).

As tempting as it would be to go on discussing further this specific topic, today we would like to bring to your attention a very well designed visual effects video we came across and which directly inspired by the latter takes the battle opposing Mac and Pc taken to a higher level. Imagine combining the technology of both of these leaders to that of beast machines such as Transformers, sounds exciting right? Nick Greenlee and his team master the idea with brio, but we will let you judge of that by yourselves.

Previous: Fluent in surfer anyone? You’ll need to be
Next: The real Twilight script – Finally revealed to you

Video game logic – No common sense allowed beyond this point