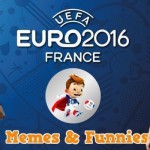 Euro 2016 memes and funny pictures – Since June 10th any football (aka soccer) enthusiast has more than probably been dedicating part of his time to UEFA’s prestigious and thrilling Euro 2016 competition. Once more, the latter has dished out a fair amount of surprises to its fans during the past month, and shown beyond doubt that nothing is ever ... END_OF_DOCUMENT_TOKEN_TO_BE_REPLACED