Star Wars Goodies – On a server far, far away… 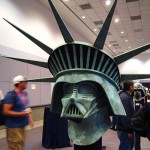 Star Wars Goodies – On May 25th 1977, George Lucas released the first episode – well the 4th actually – of what was probably to become the most famous film saga of history : Star Was – A new hope; which was to be followed in 1980 by The Empire Strikes Back and the Return of the Jedi in ... END_OF_DOCUMENT_TOKEN_TO_BE_REPLACED