Weird food – You probably will prefer not to know about

Posted by: FROZ February 3, 2012 in Interesting Leave a comment

Weird food – Notice: Before reading the following, please bare in mind that we all have our cultural differences and ‘specialties’ especially when it comes to food; so while some may find gross to suck on a cobra’s head – just saying – others may find revolting to look at a hamburger…
Here is a list of exotic dishes and drinks found all around our good old planet, it may be wise not to read this post just before or right after lunch/dinner… YOU WERE WARNED!!!

Baby Mice Wine
Found in : Korea and China
What it is: New born mice 2-3 days old still alive are added to rice moonshine where they then macerate for over a year. This very specific drink is said to be known for its tonicity and is suppose to be a great remedy for any illness. While some will stick the alcohol, others will enjoy the mice also… 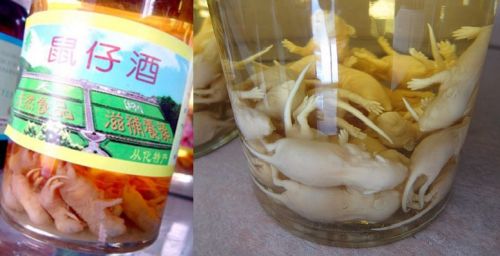 Balut
Found in: The Philippines, Cambodia, Laos and Vietnam
What it is: Fertilized duck eggs are kept warm until the embryo is revealed to be at least 15-20 days old after which they are boiled alive. Balut is known to be a real delicacy in those countries in particular and is also consumed for its high level as far as proteins are concerned.

Bat Soup
Found in: Islands of Palau and Cambodia
What it is: People who treat themselves to this soup, as many dishes you will find in this list, evidently find it delicious but also do so because of the medical virtues supposedly related to it. Bat blood is supposed to help the respiratory system and their eyes…well basically yours! After having bats presented to you, and once your choice made, the cook will then proceed as for what is of getting your order prepared asap. Note that some prefer to eat the bat raw…

Casu Marzu
Found in: Sardinia –Italy
What it is: A cheese made out of goats milk which is left to ferment until it has reached a decomposition stage obtained by the digestive action of the cheese fly’s larvae. The latter are added on purpose and will lead to the cheese reaching a very soft texture which is the goal here. While some people will then prefer to avoid eating the larvae others, on the other hand, will consume them too. Maybe best to avoid before a date.

Fried Spider
Found in: Cambodia
What it is: These spiders raised in holes are a specific species of tarantula that are tossed in a mixture of monosodium glutamate, sugar and salt before being deep fried in oil by their vendors. While being appreciated by the locals, the spiders turn out to also be a great touristic ‘attraction’ and you will find them all over the markets in Cambodia. They are said to taste somehow like a mix between chicken and cod. Why not impress your friends?

Escamoles
Found in: Mexico
What it is: Escamoles are basically ant larvae and can be found in various drinks and dishes in Mexico. They are known to have nutty and buttery taste, and among the meals you can find who will include them are salads, fried dishes and even tacos.

Maguey Worms
Found in: Mexico
What it is: Basically these are caterpillars who when mature can grow up to 65mm and are known to be very nutritious (over 650 calories for 100g). Once fried, you will be able to find them in various dishes but let’s also not forget that they are a famous ‘input’ to tequila which they are supposed to sublimate.

Horse Semen
Found in: New Zealand
What it is: If you have made it so far down in the list, you should be delighted to hear that for more or less 20 bucks you can treat yourself to a nice glass of horse semen , the new hip ‘Energy Drink’ that is said to taste like custard and comes in all different flavors.

Rocky Mountain Oysters
Found in: West America, West Canada, Spain and Mexico
What it is: Nice and chunky bull calf testicles which are peeled, coated in flour, salt and pepper before being deep fried then served as an appetizer with dips.

Kopi Luwak
Found in: Indonesia but sold all around the world
What it is: After all this awesome tucker you may be up for a nice cup of coffee, and Kopi Luwak is one of the most expensive ones that you will come across. Basically here for a little more or less than 300$ a pound, you will have the pleasure to surprise your guests by serving them coffee made with awesome coffee beans that were first eaten by an Asian Palm Civet before being pooped back out once they have finished passing through his digestive track. Hey look an awesome Valentine’s day gift!

Vodkalix – Tequilalix
Found on: Ebay, Amazon and various online stores.
What it is: Time for a little treat maybe, and this time we just may just have found your ultimate lollie. These days any lollipop fan will be happy to know that sugar-free Vodka or tequila flavored candy containing a scorpion or even a worm are no longer a dream and can be purchased for around 4.50£.

Previous: Optical illusions and brain teasers – Our selection
Next: Mashups Money/People – One original way to use money